Promise Me is the most honest, deeply personal song we have ever released. Stylistically, it doesn’t fit anywhere on the album, so we put on LAST. It has no drumbeat, no guitar, no bass, and no bombastic “radio-friendly” chorus. It’s sparse and eerie and sad.
It was the LAST track anyone at the label ever thought could be a “single”. The fans, though, have REFUSED to let it go unnoticed. In the months since Wake Up the Sleepers was released, we’ve received more heartfelt feedback, worldwide, about Promise Me than ANY other song on the record.
– – – – – – – – – – – – –
Many people who only know Kill Hannah from songs like Lips Like Morphine or Kennedy may not realize that the band formed in a college dormroom over a decade ago. At that time, all we had was a tiny core of weird fans, and access to the gear in the Film Dept at The School of the Art Institute of Chicago.
Before we were ever concerned with the politics of record labels, radio or touring, we were recording 10-minute shoegazer-y sound “pieces” and cutting them to grainy, independent art films on Super8. Not only do we look back on those days with a lot of pride, but after 7 years of relentless international touring, we found ourselves NEEDING to get back to that simpler, uncorrupted state of mind:
Promise Me became the perfect excuse.
There was only one problem: The label refused to fund a video. “It doesn’t make sense… commercially.”
We hung up the phone and called in every favor we possibly could. We assembled a large crew of Chicago’s most talented, pyromaniac friends to donate their time– And over the course of 48 hours we marched all over the most dangerous neighborhoods in the city… without permits.
So, in the end, not only is this my favorite Kill Hannah video for my favorite Kill Hannah song, but it has also become a SYMBOL– for how, without any help from the “music industry”, good people can get together and pull off a wild achievement.
Thank you to all in Chicago who got involved; Those who got cut and bruised and burned, for the sake of friendship…
AND, most of all, THANK YOU to the fans… For reminding us WHO WE ARE, and for refusing to let us take the most predictable path.
Audaci Favet Fortuna
Xo
Mat
* Digital single with exclusive bonus content coming soon! Follow @KillHannah to find out when.
* Subscribe to the channel for lots more content
* Direct links to the video— and http://vimeo.com/18902981
* Share it everywhere using the link: http://bit.ly/PMvid 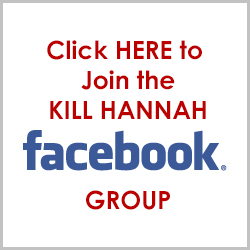